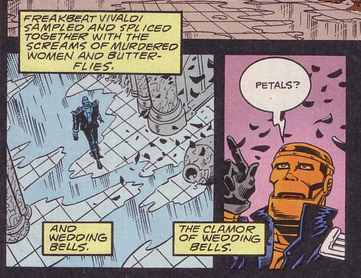 His lyrical style is an ethereal collage of troubling images, a dark and beautiful macabre poetry evoking serial killers sniffing weird stuff, overdoses and mystical ramblings, and the ghost of Hitler on the radio… Or as he calls it himself : “murder ballads”.

*Edit : apparently this is up for debate, you can read the different opinions on the Reddit post here.

Back to our regular program: In Acid Bath‘s first album “When The Kite String Pops“, there is a beautiful ballad indeed, the eerie “The Scream Of The Butterfly“:

So what does this have to do with comics? Hang on, we’re setting the stage, we’re getting there!

“Superheroes, comic books and the idea of multiple dimensions, alternate earths, that’s all the stuff I love to think about,” he said. “It makes me happy to think about magical things.”

And he was onto the good stuff:

“I was very moved by Alan Moore and Watchmen,” he said before confessing to ownership of every work the English writer has ever published.

Before “Watchmen” was repackaged as a graphic novel in 1987 and named one of Time’s 100 Best English language novels, Riggs bought all 12 issues in the miniseries as they were originally released, off the rack.

Surrounded by his favorite comics of the ’80s, his collection grew to include titles such as “Miracleman,” “Sandman” and Frank Miller fan favorites like “Ronin” and “The Dark Knight Returns.”

So he was onto Alan Moore, Frank Miller, Neil Gaiman… I think it’s safe to assume that he was also onto Grant Morrison then… But for now, let’s first see if those comic’s influences showed up in his work indeed…

On the same album, the song Jezebel contains the line “Our Superman found dead in a telephone booth…” (What a chilling thought by the way…)

After Acid Bath‘s bassist Audie Pitre died in a tragic car accident caused by a drunk driver, the remaining members formed a slower more melodic band: Agents Of Oblivion, and this is the album cover:

The artwork is the Hand Of Glory, lifted from Mike Mignola‘s Hellboy story “Box Full Of Evil”:

This isn’t the only time Dax Riggs used Mike Mignola‘s art, he produced several stickers lifted from his artwork, like this one for example:

Ok, we have established that Dax Riggs was indeed injecting his love of comics into his lyrics. Back to Grant Morrison, this story called “The Butterfly Collector” was published in 1989:

It features the character Red Jack, who calls himself God and has a collection of pinned butterflies from which he arbours his power:

In his palace, the background music consists of:

Acid Bath‘s song “The Scream Of The Butterfly” was released in 1994, it features the lyrics:

“She smiles like a child with flowers in her hair
With blood on her hands into the sun she stares
She feels it die, I heard her cry like the scream of the butterfly“

I rest my case.

Since the writing of this article, it has been brought to my attention that the sentence appears in The Doors‘ song “When The Music is over“:

Bonus stuff : the lyrics from Scream Of The Butterfly also contain the following lines:

“Rabbit howls like something old
As we twitch to her lullaby“

Which were inspired by the book When Rabbit Howls, written by a recovering abused schizophrenic person as part of her therapy:

And that’s where it gets weird… Because Grant Morrison cited this book as an inspiration for the character Crazy Jane… From Doom Patrol, as documented here:

The bulk of these decisions, both positive and negative, have their roots in a common origin—the source that Morrison cites in Doom Patrol #20 as their inspiration for Crazy Jane, When Rabbit Howls, which Morrison describes, in language that prefigures their objectification of Jane, as “a peek at what reality looks like from the other side.”.

In the same song, you can also find the following lyrics:

“We dropped some acid, killed our parents
Then we hit the road”

Which feels very similar to the line on Sonic Youth‘s 1990 “Goo” cover art by Pettibon:

I also suspect that their song “The Blue” was inspired by a story from Alan Moore‘s mind-blowing incredible run on Swamp Thing : “The Nukeface papers“:

The story features a strange man who wanders around after an incident in a nuclear facility, he goes on rambling drinking some weird stuff, and ends up offering it to a homeless guy in the woods.

The results are quite problematic for the poor fellow… The unsuspecting man ends up slowly dying, and his last words are:

By the way, his run also features a story called “By Demons Driven!” published in 1984…

Now where did I already saw this sentence again?

Acid Bath‘s second and last album Paegan Terrorism Tactics which was released in 1996, opens up with the “Paegan Love Song”:

Which features the famous line:

“You scream, I scream
Everybody screams for morphine”

Now it’s true that the live “I scream, You scream, We all scream for Ice Cream” is pretty well known in American culture , but maybe Dax‘s influence comes from the comic, as the concept feels very similar.

In conlusion: I really encourage everyone to give a listen Acid Bath, they are one of my favorite bands, and their legendary statue is not usurped.

They only released two albums : “When The Kite String Pops” and “Paegan Terrorism Tactics“. Even if you’re not into metal, they got some more beautiful ballads apart from “Scream Of The Butterfly” that everyone can get into:

You can also try Agents Of Oblivion‘s only album, it’s more rock than metal, and thus more accessible (and also contains a really cool rocky cover of Dead Girl !):

After that, Dax Riggs went solo, leaving behind the metal genre. His beautiful voice can be heard on several albums, my personal favorite album being “We Sing Of Only Blood And Love” (which is true, isn’t it? We do…):

If you like his stuff, there are also some really cool unreleased demo songs (“Riding The Wormhole” for example) floating around that you can find using Soulseek.

Regarding the comics mentioned in this article, here is some good stuff:

Alan Moore : Apart from his more widely known works such as V For Vendetta, Watchmen, I particularly recommend his Swamp Thing and Miracleman runs.

Grant Morrison : The Invisibles, The Filth and his Doom Patrol run.

Peter Bagge : Hate, Sweatshop (in which you’ll find a delightful roast of Neil Gaiman by the way in issue 5) and his Spiderman story.

Oh, and that Pettibon illustration? I did a BJJ 10th Planet crossover illustration reference by the way:

Crap… I ended up talking BJJ again, we do are an annoying kind… that’s more than enough, no one is reading all that, peace out!