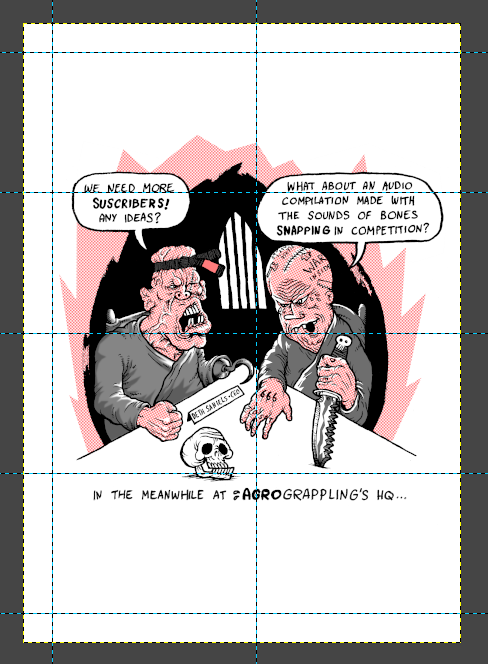 One of my quarantine project has been to self make a risograph book compiling my best BJJ themed illustrations and mini-comics:

It was a long, complicated path, and I made a lot of wrong turns… Here is what I learned from all this:

Plan, plan, plan! Plan ahead all the boring details, and then… plan some more!

This might sound stupidly evident for people who have already done this kind of stuff, but for me it was my first time doing something like this, and as always, being the stupid stubborn sunavabitch I am, I had to learn it all the hard way…

What happened was that once I decided that I was going to go ahead and do this project, I just wanted (of course) to jump right away on the more exciting stuff: editing and coloring the images.
I thought that I would sort out the technical aspect of the construction of the book while going along… Boy was I wrong… In the end I spent a lot time redoing stuff I had already done… Several times… And it sometimes really took a toll on my motivation.

Here are some concrete examples of my errors:

I knew I wanted to do it in a A5 format, I read the specifications on the printer’s website so I made the cut guides on my GIMP files and thought “OK I got it, I’ll just adjust everything once all is finished!”.

Problem: Well turns out this just doesn’t work… My bleed and Cut margins were a bit off… Not by much, but it still managed to make a mess of all the work I had already done. For the full bleed images, even a small change can really have big consequences if your image had already been adjusted to fit in tightly (the original images were not made with any format in mind, so it was sometimes difficult to make them work in the A5 format).

Solution: I should have communicated earlier with the printer provider, downloaded the specific templates for my project, and work from here.

Also, if you do full bleed illustrations, overextend the illustration on the sides in the drawing stage, because the print & cut margins can sum up to 1cm on each side, so if you didn’t plan it right, you might be obligated to take out some details near the borders, or even redo the whole illustration…

Here is another example from my DIY Bootleg A6 Mini-comics Collection:

I self printed the interior pages on one side, and had the color cover painted at a printer… What I didn’t knew (because again… I didn’t ask…) is that the cover files would have a blank 3mm margin, so that the image would be resized automatically, thankfully I made some tests before launching the printing:

I wanted to color my black in white pieces using 2 colors: a dark blue, and red, and using the values of those for all kinds of effect. So, I just simply used a layer for each color and thought “I’ll convert just them in grey values for the printer afterwards!“.

Problem: The risograph printing process works like this: Each color will be processed from a black and white image: The darker the area, the more color will be projected there. A full black square will be printed like a red square for example. But if you just take out the color of a 100% red area, it doesn’t convert to 100% black… It will be something like a 60% grey value. The result will be a pink area instead of a red one on the printed page.

Once you got all kinds of gradients interlaced with plain colors on a flattened layer, it’s very difficult to adjust the individual values of specific zones.

Solution: take time to think about the specific printing process your going to use. Talk with the printer, he can direct you to resources and information.

Take one illustration, the more complex one, and do a test run from A to Z in order to obtain a mock-up version of the final file for the printer, and send it to them so that they can confirm you if this would turn out fine

The construction of the book and pages order… Oh boy…

I had a vague plan and thought “I’ll just assemble that as I’m progressing…“. Also, some illustrations needed 3 colors : Blue, Red and Yellow in order to work, so as a A3 print page is made of 4 images, I had to think which ones would be colored in 3 colors.

Problem: It means that I couldn’t have 2 different 3 colors images back to back if I only did one A3 page in 3 colors. So that messed up with the order of the pages, and as there are some mini-comics that go on on several pages, this was especially problematic…

This plus the fact that recto-verso is a bitch when you assemble 4 individual images per page (8 per sheet, recto-verso), this plus the 3 colors problem…

So by the powers of all this combined, I made a looooooot of mistakes, I re-did everything a lot of times, and then I ended up redoing the same mistakes again, and redoing everything… I navigated the perilous waters of stupidity and insanity for a long period… In the end I had to make small mock-ups versions of the book in order to be sure I wasn’t doing any errors…

Solution: once again… Communicate with the printer. Because of the number of pages (48), the printer informed me that this project couldn’t be constructed by just folding horizontal A4 pages folded in half. Each page would have to be individually cut and glued back… This means I spent a lot of time trying to figure something out… That didn’t needed to be figured out in the first place!

I also highly recommend to make black & white cheap mock-up versions of the final product just to see how the pages will work together!

Make a folder with all the individual pages (if your book doesn’t have page numbers like mine, put the image on one layer, and one another layer the page number) and work from here as early as possible a small mock-up version.

Then, once you’ll receive the printer templates, you’ll be able to reconstruct the book from here. And then only work on the final versions!

This will save you a looooot of time, I guarantee it.

-PLAN AHEAD all the boring technical details before jumping of the “fun” part!

–TALK TO THE PRINTER as early as possible! Retrieve his technical specifications, his templates, ask him questions along the way! He can direct you to a lot of resources and information!

–MAKE DIY MOCK-UP VERSIONS OF THE FINISHED PRODUCT! It will not only help with the book construction, but also for the motivation!
Working on something like this takes a lot of time, and you can sometimes lose the motivation. Having a mock-up version available you can go back to really does wonders! Flip through it, feel it, imagine the final book, it really helps staying focused.

-If you plan on doing full bleed illustrations, really extend the illustration way beyond the intended margin! You’ll thank me later.

-When sketching and drawing the individual comic panels, make a sketch mock-up including the word balloons with the text in it! Sometimes I draw a cool picture, and later struggle to insert the text because I didn’t planned where I would fit it exactly before.

-Check out Ed Piskor‘s and Jim Rugg‘s CARTOONIST KAYFABE Youtube Channel, it is a golden mine of technical advices, every illustrator/cartoonist should watch those religiously!

Well that’s it! Hope it helps someone to make less mistakes than I did!