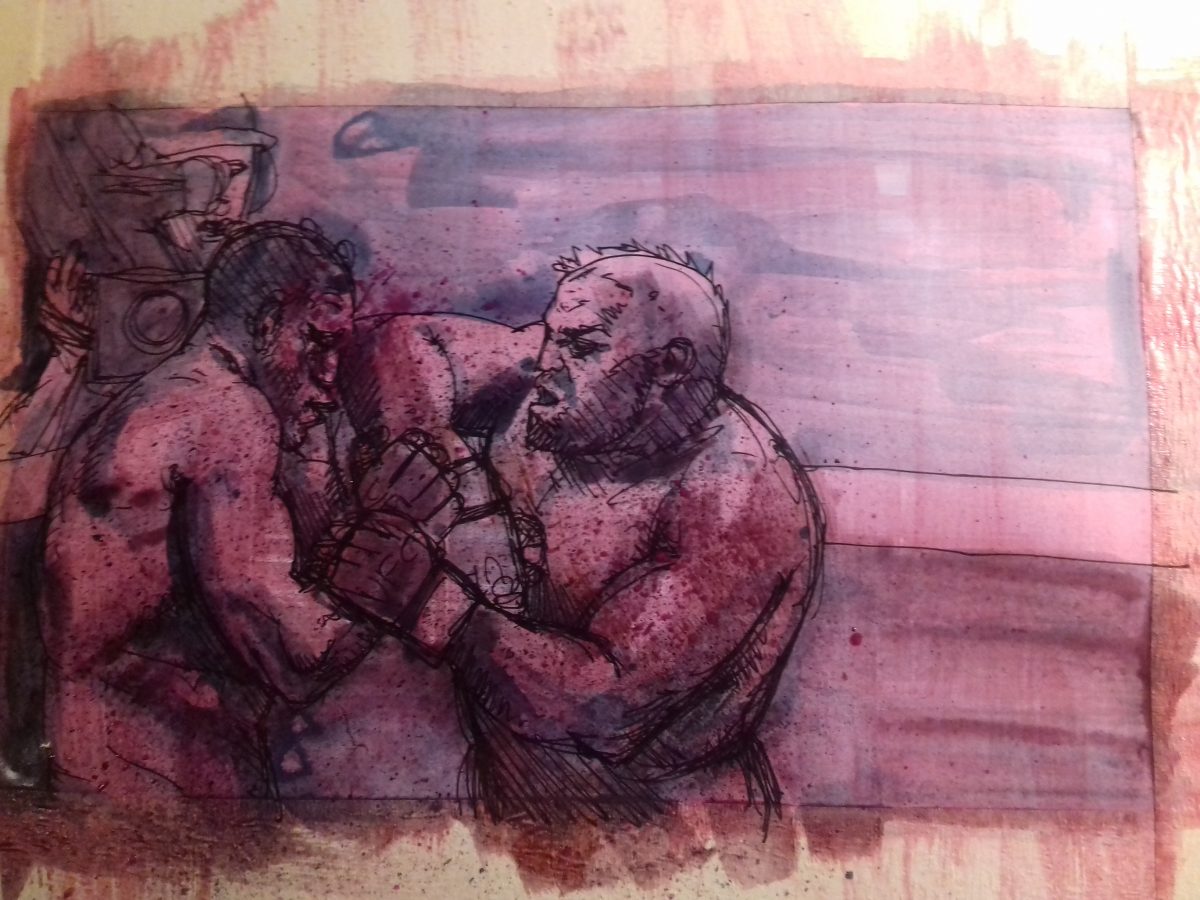 As many illustrators using “traditional” media, I feel that my finished artwork loses a lot of the initial movement and energy that was contained in the initial sketches…

“The eternal battle between controlled tightness and raw energy”

Postulate: Whatever is gained in tightness is forever lost in raw energy. Which we can translate to:

As you go through several tightening steps between the initial sketch to the final piece, using a light table for example, I feel that whatever is gained in “tightening” is lost in counterpart in movement and energy. The cause might be that when producing the final art, one is very concentrated in not making any mistakes, and thus one does not allow the hand to move freely across the canvas. Each line feels more controlled and loses its wild energy.

I found several tips in how to try to fight this phenomenon, but now I want to talk about a particular exercise that I found very helpful for keeping that free initial energy: Speed Painting.

The concept is simple, you start drawing, no preparation, no previous sketches, no constructions lines, and you produce a finished piece of artwork with this piece, in the course of a few hours (2 or 3).

The most important thing it teaches you it to work around you mistakes, in other words FIND A WAY TO MAKE IT WORK! If you make a mistake, do not start over: draw on top, blacken the zone, paint on top, throw a splatter… Those unexpected moments, “accidents” you might call them,might end up creating some interesting results!

I started to think about during my Brazilian Jiu-Jitsu practice: when you are rolling or competing, if you end up in a bad spot, you cannot just stop and start over! You have to keep on and try to find a way to improve the situation, and try at least to finish in a better spot. This mentality transferred to drawing/painting as been very liberating and has helped me a lot!

Now, onto the concrete stuff! As I am self taught, mainly through analyzing (meaning “drooling over”) the painting styles of Simon Bisley, Glenn Fabry, Bill Sienkiewicz, John Mueller, Dave McKean… the techniques I am using might not be the academic ones, but they are the one I understand, love, and use.

Those paintings are 20 by 15 cm, using acrylic paint.

A quick note here : there is a real difference between the cheap low quality paint and the high quality ones. The later have much more pigment, and thus a much more covering power. This is particularly important as the use of thick layers will be used for effect. If the paint isn’t opaque enough you will have to make many layers, and as you cannot replicate exactly each stroke, it may give a blurry effect on some parts. You can always dilute the paint with some water, but it’s much more hard to thicken it (you have to use some special products, which change the intensity of the color depending on the mix…). This is especially through for light colors like yellow.

Here are some process shots of a speed painting I did of Mark Hunt elbowing Bigfoot Silva in the face (sorry Bigfoot, but this picture is too dope!):

I believe the correct sound effect in a comic would be “SPRLOUNTCHK!“

Pro-tip for the masking tape, before applying it on the paper, glue it a few times to your jeans first in order to diminish its gluing power, or it might rip up the paper when taking it out.

I also realized it’s been a while I haven’t sketched with a pencil, I don’t know why exactly, but it also helps to “jump” directly into the final processing stage.

As I free handed the line art, you can already see some differences in Bigfoot’s lower body, also the framing isn’t the same as the picture… Instead of redoing it, I’ll just go along with this.

I quickly lay some diluted paint. I use a mix of black and blue paint in order to establish some shadows, it’s done very loosely.

Now I mix some brown/red/magenta/purple depending on the mood and I drop a layer on the whole painting, this will allow to have a common base which will serve to unify the whole thing. I also throw some splatters with an old toothbrush, this creates some texture while being very fun!

This is the really fun part where you can start to see how the finished piece will look. The thicker parts are used to “block”texture underneath. The imperfections of the strokes create interesting textures already. You can also re-add some color splatters at every stage to give it a more wild and dynamic look.

Adding details, giving more attention to the important parts : heads, hands… Using some blue mixed with the skin tone for the transition shadows can give some cool effects.

I finished the background, used some non-diluted red for the blood, a bit more details here and there… At this stage it’s been between 2 to 3 hours non stop, I’m starting to worry that each new stroke might damage more the piece than improving it, so it’s a good time to stop.

At this stage it’s very important to take out the masking tape very carefully!

It’s far from perfect, but that was part of the deal, I feel that for a “finished” piece done in under 3 hours the results are good. I could always come back to it if I wanted to polish it more anyway.

I should have laid a thicker black background in order to have the cool red blood splurting out of Bigfoot’s face stand out more.

I now have to find a way to translate this to my pure black and white artwork which I feel is very “controlled” and lacks energy.

One thing that I did for this particular piece was announcing it live on my Instagram stories beforehand, and then I posted a picture live of each step live. This had the effect of forcing me to finish it, and to not pussy out of this. I will surely redo this because I felt the added “pressure” forced me to try to give my best. I’m thinking maybe doing some live paintings soon. If you want to follow live the next ones you can head to my Instagram and give me follow.

Some other speed paintings:

Well that’s it! Hope you liked it! I really encourage you to try this, especially the “live” part on Instagram (or Facebook, Youtube…). Don’t hesitate to let me know how it worked for you, and share your tips!