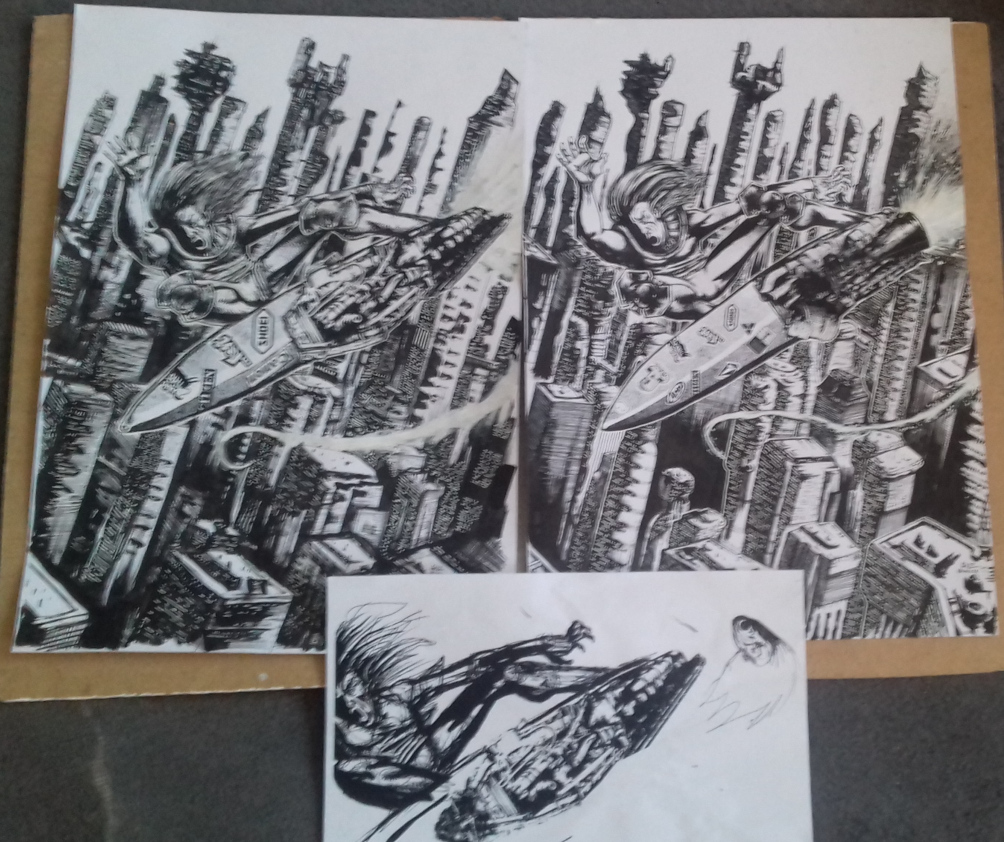 Some of my favorite comics, and artists, came from the legendary 2000 AD publisher. Their adult-no compromise-punk fueled energy was so different from the stories and concepts proposed at the time by the other major publishers such as Marvel, DC…

Turns out 2000 AD is running a regular art competition based on their characters, and apart from the exposure, the winner can also get published (and win some money).

Long story short, as I have been surfing since my teens, I always loved the Chopper character from the Judge Dredd universe, and though about making an illustration I could send them once the “Chopper” theme would pop-up (which I’m sure it will… Hopefully… Some day… Maybe… Fingers crossed!).

I wanted to do an ambitious illustration, Chopper would be blasting through Mega City One‘s skies riding an old vintage sky surfboard of my creation, which would allow me to play with some collage for the motor and the stickers on the board.

In order to capture surfing’s raw kinetic energy, I based my illustration on an iconic picture of punk surf hero Christian Fletcher, and I wanted the surfer’s dynamic pose to contrast from the dystopian city’s monolithic stillness. In order to be able to have a large enough image, the format would have to be A3.

As I never drew such a wide city landscape, and at such a big size (for me) I wanted first to do a sketch to test some things… And here is where I messed up!

See, I drew the character, the board, some thing turned out pretty good, and some other didn’t, but in general I was kinda satisfied. I then started to delve into the unknown: the city blocks of the background. I was liking the results, so I kept adding and adding, pushing the illustration further, day after day, up to the place where it was constantly switching in my mind between a “sketch” and a “maybe final illustration”. But I was fooling myself. I was only considering this illustration as a sketch in order to feel “safe” in case I messed up something, I was giving myself a false sense of security because I was afraid of the result I might not be able to achieve.

Once I “finished” this sketch, I realized the “security” effect I felt while drawing had backfired: I was now feeling more afraid to go for the finished piece than before doing the sketch version: Would I be able to achieve the same results in the parts I liked? And would I be able to improve those I didn’t? I slowly realized my mistake: If only I had gone all in from the get go, I would have been left with only one version, containing the best results possible for every parts: those I liked and those I liked less. Because not having a second version I wouldn’t have to compare each part against a “competitor”.

Now every part of the piece had 2 versions, every bit was competing against itself in a different version. If I had gone with the mentality of producing the finished piece from the first try, the parts I did right would have been the same, and I would have been investing more into the parts I liked less, instead of relaying on my safety net “Doesn’t matter if I mess up this part, It’s just the sketch!”. Hell, I could even have “corrected” the parts I liked less, using some paste-ups or white outs for example.

Specifically speaking, analyzing the 2 pieces side by side, I think I managed to upgrade his right hand, which was a bit weird, his kneecaps are also better. I also wanted the board to be full of stickers. The background city blocks are more tight in the finished version, the propulsion is also cooler on the second version. But the price I had to pay was the essential part: Chopper’s expression and character… I really like more his face, hair and body position in the first version… And it’s the central part of the piece, so I’m not sure it was such a great trade. I ended up pasting a new version in order to try to correct this.

Let this be a lesson to me: no more safety nets, the trade-of isn’t worth it. Sure you still have to sketch, but do not push the sketch too far, it has to remain a “sketch”.

It’s a bit hard mentally to invest so much time and effort into something and not being 100% satisfied with the result, but for now let’s value the lesson learned, and as always, I have to keep in mind that this was not my final drawing. This is not my definitive illustration, the next ones will be better, one after the other!

As I was coloring the final piece, I remember at one point I wanted to do false comics covers with some concepts I have, so I did a vector version of the Chopper logo, I started playing with it, and then I realized we were the 1st of April, so I said to myself: Why the hell not?