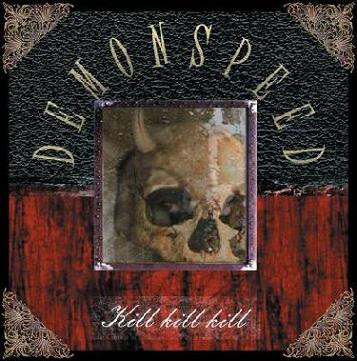 Demonspeed only existed for a relatively short period of time around the turn of the century, and all their song are compiled and featured in their only full length album “Kill, Kill, Kill” released in 2002.

Before that, they had also released a 7 songs album called “Swing Is Hell” in 1997, whose title fits particularly well their unique sound.

Let’s put it simply, Demonspeed plays a weird mixture of metal and swing, with vocals performed in a typical Las Vegas Paul Anka crooner style… while the lyrics are about serial killer stuff… And… As weird as it may appear at first sight, It just fucking works! It sounds like tuxedos and martinis at a Slayer show.

The music is unique, and the almost parodic crooner voice rolls smoothly over some swing/metal riffs rocking upon either jazzy beats or blasting double pedals, depending on the times. The songs are pretty catchy, and you after a few listens you might find yourself humming “John Wayne Gacy killed 33 children, I wish that I could so the same…” Wait what???? Yep, those are the first lyrics from the song called “Pogo”, which is the first song of Swing Is Hell… Hell of a way to make a first impression!

The song “Zodiac” (about… Well… the Zodiac killer of course) starts off with an a cappella intro which evolves further down the line into a fast-paced melodic part that could easily fit in any melodic punk/skate core band:

Other titles include: “Hunting Humans”, “Fifth Of Satan”, “Hand Of Glory”, “Green River”… And “Michael Landon’s Ghost” (???), and the album ends with 2 covers: “Movin’ on up” from the TV show “The Jefferson’s” and a very fun The Clash’s “Rock the Casbah“:

Contrasting with the gloom and dark subject of the lyrics, the music manages to be quite fun and catchy, and the different elements of the formula work really really well together, strangely bringing a kind of weird humor to the table, allowing the band to avoid falling into a cheesy corny territory. The mixture is, simply put, perfect.

The equilibrium this band found is impressive, as it could have been easily ruined by a slightest difference in the dosage: too much metal, or shitty lyrics, or a bad singer… But no. This band created a very unique thing, produced one album, and then disappeared…

One might think that this is for the best, after all, how far could they have pushed this concept without evolving? And, for this particular band, who created this very particular formula, maybe any evolution, any change, would have broken the fragile equilibrium discussed earlier. So, what was there left to do, the exact same album a second time? Would it have been good? Interesting? Maybe… But would it have been better?

One of the band member was Sal Villanueva, who emerged from the NYHC scene, played in several more “classical” bands, and ended up working on the production of a lot of albums. As a fun note, the “Swing Is Hell” 7 song album artwork featured a copy of his driving incident records… And apparently the man drives like a wild raccoon!

You might have guessed it, I love this album, the music is incredible, very well thought and executed, and the singer lyricist rises to the challenge and does a wonderful job of bringing it to the next level. My only complaint would be that the artwork for “Kill, Kill, Kill” feels a bit uninspired and bland comparing to the delicious insanity that awaits the listener inside.

Demonspeed‘s records and music, and in fact any information at all, are very hard to find. They are also not present of the habitual streaming services, for the physical productions, you will have to try your luck on Discogs where some are listed for sale. As for mp3 versions, you can find it quite easily on Soulseek. Gladly, as of now, their whole album can be listened on YouTube here’s the link for the whole playlist: